Skypark has direct access to the UK’s motorway network at Junction 29 of the M5 via the new Clyst Honiton bypass and A30 dual carriageway. 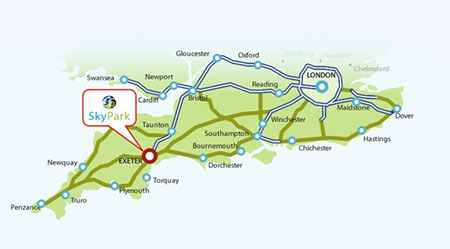 Skypark is just a 15 minute drive from Exeter St David’s station and also Tiverton Parkway providing access to the main London Paddington to Penzance line. There is also an hourly service to and from London Waterloo on the ‘Waterloo Line’ and a new train station is starting construction for this line at nearby eco-town development Cranbrook.

Skypark is situated right next to Exeter International Airport which provides extensive links to a wide range of UK and European destinations.

A new Cranbrook – Exeter express bus service is already running, which will stop at Skypark.